Proportional Representation: reduced to the absurd 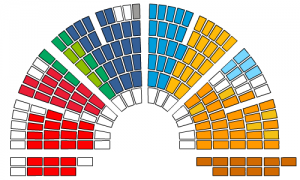 Here in Canada the federal government has been toying with the idea of introducing proportional representation (PR) to our electoral process.

I know the typical argument against it.  That PR often leads to hung parliaments, incessant horse-trading to get any legislation passed and, especially where thresholds are low, it can overweight the influence of fringe parties.  So, the Fishing and Hunting Party gets 3 per cent of the vote and the same percentage of seats and, in effect, may have the preponderant vote in the legislature.  But alternately, if you set the threshold high, say 10 percent, you risk frustrating and angering significant minority populations.

PR taken to its absurd conclusion

Let’s play with the logic and reasoning behind the pro-PR argument.  Let’s say my Member of Parliament, who sits on the government benches in the Canadian Parliament, convenes a town hall-style meeting in our riding to promote the government’s proposal to introduce some form of proportional representation to our electoral system.

“You see, it’s only fair,” he says. “Consider for example that over three percent of Canadians voted for the Greens in the 2015 federal election, but as a party they only earned one seat – about one-tenth of what their vote would have indicated.  In effect, the 600,000 who voted for the Greens are not being represented in our system, while other parties are vastly over-represented.  We need to fix that and establish representation that reflects the actual vote.”

Well then, if we need representation in closer proportion to actual expressed votes, I say let’s introduce that principal universally, not just piecemeal.  Let’s follow the argument to its logical, absurd conclusion.

So let’s say my MP won our riding with 44 percent of the vote and his three opponents received 38 percent and 15 and 3 percent respectively.  In keeping with true PR logic, then, I think my MP should occupy his seat in Parliament for only 44 percent of the year — about 160 days each year.  And being such a jolly proponent of PR, he will agree to allow his three opponents to sit in his seat in Parliament for the remaining 139, 55 and 11 days respectively. Sure.

I don’t think those who are so hot for PR would ever approve this logical extension of what they are proposing.

Oh, and in fact, given that 35 percent of a typical riding’s populace didn’t even bother to go to the polls, real implementation of proportional representation would seem to recommend that the parliamentary seat should actually be left unoccupied for a full 128 days each year!