Some takes on the UK election results

…from my perch in Canada

UKIP toehold with the working class slipped; Labour benefited as they came home

May can govern for 5 years given that because Sinn Fein never takes their seats,

she only needs 322 to command a voting majority in the Commons.

BUT, of course she will need help. She has the 10 Democratic Unionists from Ulster to bail her out.

A net loss of 12 seats in a house of 650 members is not as catastrophic as the BBC and others made it out. Globe and Mail is calling it a “disastrous political gamble.” Someone’s been drinking the hyperbole kool-aid.

But it is a significant disappointment when you yourself said you needed a bigger mandate.

May’s loss is due in part to her stampeding seniors fearing the loss of social benefits, and then she backtracked mid-campaign.  May flinched.  She’s no Maggie Thatcher.

With UKIP and the Scots in retreat, Britain is now back to a virtual two-and-a-half party system. More on that below.

Media are hailing this as a victory (?) for Labour?  The best they could do is trail the Conservatives by over 50 seats?  That’s a victory?  But this will incline the party to keep Corbyn.

The knives will be out for May.  This will be a test of character.

Loved the BBC coverage.  Most brilliant moment of the night was the

As far as Brexit is concerned, this changes nothing.

Scottish Nationalism now reminiscent of Québec’s Péquistes.
Slapped down, but still there.  “Just give us good government and stow the constant distracting autonomy and referendum crap, willya Jock.”

One would have thought that in the shadow of two terrorist incidents, people would have rallied around the incumbent  She really blew the campaign. And from what I can make of the coverage, she has surrounded herself with a very small team of advisors and shut out some of her cabinet colleagues so some will be willing to get rid of her after this result.

How did the Conservative vote increase over 2015…but the party gained less seats?

The collapse of UKIP explains much of this.

In a three-party system, the threshold for a majority tends to be about 42.5% (yesterday UK Tories fell shy at 42.4%)

In a four-party system, the threshold for a majority is about 36% (UK Tories last time got a majority with 36.9%)

Thus, the simplest answer is that in 2015, in a four-party system — the Conservatives got a majority with 36.9%;

in 2017 with the collapse of UKIP and now effectively a three-party system, the threshold tends to be about 42.5%

And why the hand-wringing?  Many of the established democracies are ruled by minorities and coalitions, thanks to proportional systems.  Accommodation and power sharing isn’t the end of the world. 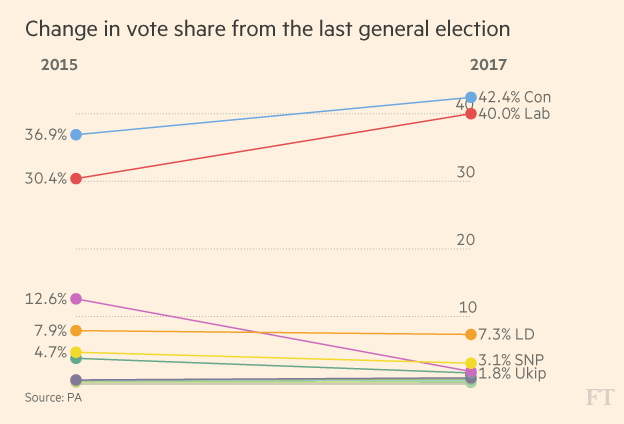